The Short Biography of HE Khentrul Gyangkang Rinpoche 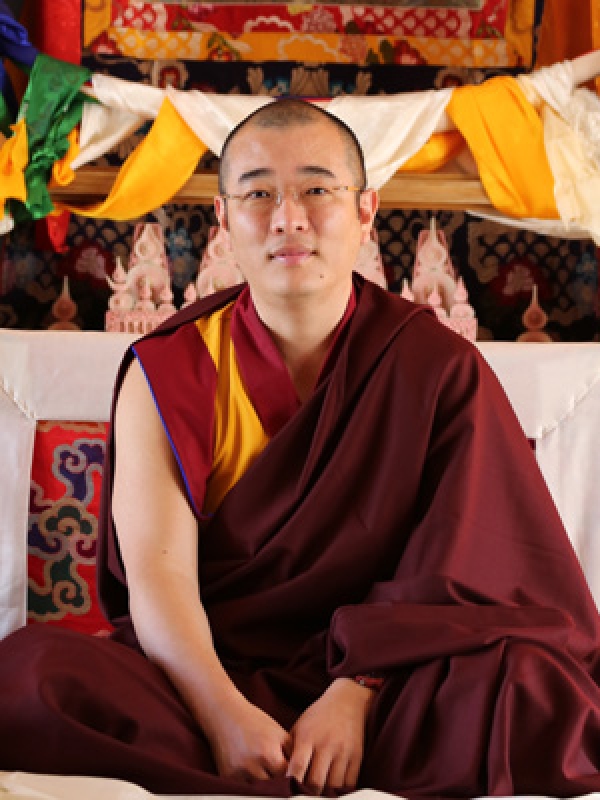 First Gyangkhang Rinpoche
The First Gyangkhang Rinpoche, named Wong Chug, was born in the sacred place of Guru Rinpoche, Gangrig in Tibet. He was the brother of Karma Tashi Rinpoche. Karma Tashi Rinpoche was the Fourth Throneholder of Palyul lineage and the First Karma Kuchen Rinpoche, one of the two principle heart disciples of the First Drubwang Pema Norbu Rinpoche. Prophecies in many scriptures of oral transmission and treasure transmission revealed that he was the emanation of Avalokitesvara. Countless sentient beings were liberated through his priceless teachings.

Second Gyangkhang Rinpoche
The Second Gyangkhang Rinpoche was named Rigzin Jigme Longdrol, which literally means, “The Fearless Awareness Holder who is liberated in the Vast Expanse.” The teachers from whom he received teachings were Karma Nyingjed Wangpo, Karma Jigme, Jigme Gyalwai Nyugu (Patrul Rinpoche’s Master), and Jigme Tsewang Chogdrub. He listened to all the three Baskets of teachings (Tripitaka) namely the Vinaya ( Moral Discipline), Sutra ( Teachings on Concentration), and Abhidharma (Buddhist Metaphysics). In addition, he also received the Mahayana Teachings or the teachings of the higher vehicle, and the teachings of both the Transmitted Precepts (Kama) and the Rediscovered Teachings (Terma). In the early part of his life, he made great contributions in propagating the distinct teachings of The Palyul Lineage. He spent the later part of his life staying in retreat at a holy cave of Wrathful Guru Rinpoche. Whilst practicing, he gave Dzogchen Teachings to thousands of students and also built many stupas and sacred images of Buddha. Moreover, he accomplished both the generation as well the completion stages of meditation and tamed countless visible and invisible sentient beings. Thus he was considered a great master and a widely respected awareness holder.

Third Gyangkhang Rinpoche
The Third Gyangkhang Rinpoche was named Pedma Kenzang Tenzin. When he was a child, he often talked with Chenrizig (Avalokitesvara), just as if conversing with another person. One of the Shakya Masters, Khenpo Baden Chisong Rinpoche recognized him as the authentic incarnation of the Second Gyangkhang Rinpoche. He studied under great masters such as Jamyang Khyentse Wangpo, Gyaltrul Pema Dongag Tenzin, Jamgon Kongtrul Lodro Thaye and Rigzin Dzotu Pawo Dorje. He listened to the entire Kama and Terma Teachings of Nyingma Tradition, practiced them and then taught them to his disciples thus making a remarkable contribution in the propagation of Buddha dharma.

Biography of the Fourth Gyangkhang Rinpoche

At the age of four, His Holiness Penor Rinpoche invited him to stay in Namdroling Monastery and thereafter looked after him as his own child. When he was 15, he received the esoteric teachings of Tantra thus laying the foundation for the higher practices. He entered Ngagyur Nyingma Institute (Shedra), a branch of Namdroling Monastery and an advanced college of Tibetan Buddhism where he studied general Buddhist Philosophy as well as the distinct Nyingma Teachings. He also studied Tibetan grammar, poetry, and Tibet’s political and religious history. Unlike other students, he was brilliant in his studies.

In his fifth year in his university, Gyangkhang Rinpoche displayed his scriptural knowledge by giving a lengthy discourse on Sangwa Nyingpo (Magical Net Tantra, a Mahayoga Teaching) in front of His Holiness The Fourteen Dalai Lama and an assembly of thirty thousand people both lay and ordained from all the different religious traditions of Tibet. He also debated on this subject and emerged victorious. His Holiness the Dalai Lama praised his wisdom in front of all and offered him a khata, a traditional scarf, encouraging him to hold, sustain and disseminate the teachings of Lord Buddha for the benefits of all beings.

He received the empowerments, oral transmissions and pith instructions on the whole Kama and Terma teachings (the distinct Nyingma Teachings of the Transmitted Precepts and the Rediscovered Treasure Teachings) from His Holiness Dilgo Khyentse Rinpoche, Dodrubchen Rinpoche, Jadrel Rinpoche, Khenpo Jigme Phuntsok Rinpoche, and Nyoshul Khen Rinpoche. He specially received the distinct teachings of Palyul Tradition including the Namchö Teachings from His Holiness Penor Rinpoche. He not only received Ngondro (Preliminary Practices), Tsalung (Winds and Channels), and Dzogchen (Great Perfection) teachings but also practiced them perfectly. He also learned the Buddhist philosophy mainly the sutra and tantra under the guidance of many great Khenpos and masters of his time.

In 1994, under the Bodhi Tree in Bodh Gaya, Gyangkhang Rinpoche received the vows of full ordination from His Holiness Penor Rinpoche. At that time, he was given the name Thupten Mawai Nyima Jigme Singye Chogle Nampar Gyalwai De. In 1995, he completed the nine years course in the institute and considering his high level of knowledge, Penor Rinpoche bestowed him the title of a “Tulku Khenpo” and recognized him worthy of a dharma teacher who can guide others towards the path of enlightenment.

Before becoming enthroned as with the title of a Khenpo, he gave teachings at many occasions in Namdroling of America and Asian countries like Hongkong, Taiwan and others. The teachings that he gave included Buddhist teachings on Bodhicitta, meditation and philosophy. He also gave empowerments and oral transmissions.

Gyangkhang Rinpoche has realized the meaning of Lord Buddha’s teachings both the sutra and tantra. On several occasions, he has represented His Holiness by giving advice, instructions and teachings in many dharma centers around the world. At present, he is teaching in the Ngagyur Nyingma Institute (Shedra) and shoulders monastic responsibilities.