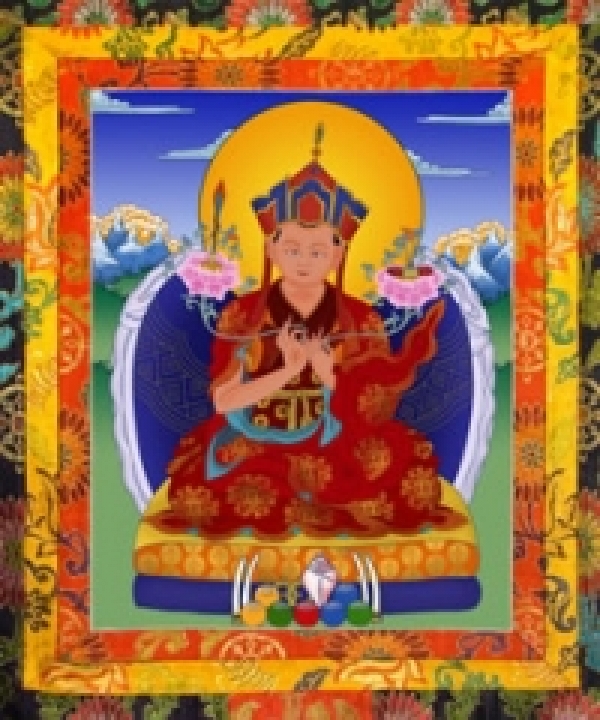 In 1830, the fourteenth rabjung year of Iron Tiger, Gyatrul Rinpoche was born into the royal heritage of the Chinese emperor’s minister, in Tsakho Gyakha Bhoto village of Gyalmo Tsawai-rong.

At the time of his birth, there were many astonishing signs and, as a child, he displayed unusual signs of having awakened his innate pure awareness. While at play with other children, he would hold his vital air and, barefooted, balance himself on the point of a sharp knife. By receiving just one simple gesture, he would comprehend reading, writing and all subjects, as though he never forgot what he had learned in previous lifetimes.

He could also clearly recalled his past lifetimes as Rongton Shung-gya Shakya Gyaltsen and Kunzang Sherab, remembering also the area of Sangphu Neu Thong, where he had previously lived, the exact layout of the Palyul monastery, past events that had occurred there and other additional information. It was clear that the dharma protectors were watching over him and in particular, he was constantly assisted in the accomplishment of miraculous activities by Ekartsati, the principal female protector of the Secret Mantra.

Through the strength of his contemplation and the blessings bestowed by the meditational deities, Gyatrul Rinpoche clearly understood the meaning of all of these precious dharma scriptures and was able to ascertain the sutras and tantras by memory, as an exhaustless source of wisdom. Advancing his meditative experience in the generation, completion and Great Perfection stages, he manifested the pure qualities and signs of true accomplishment.

In 1891, at the age of sixty-two, on the twenty-second day of the fifth month, with all the signs of having reached the highest stages on the path to liberation, Gyatrul Rinpoche passed beyond this world.