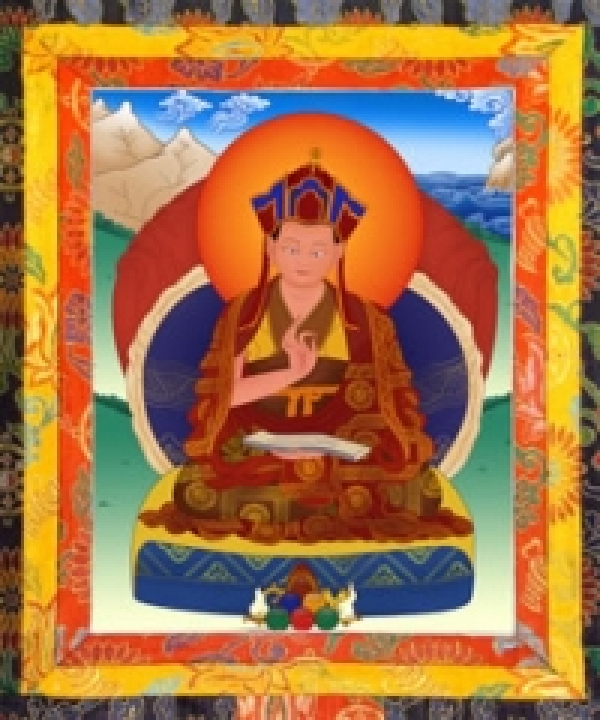 Born in 1887, the fifteenth rabjung year of the Fire Pig, Pedma Norbu was brought to the Palyul monastery at the age of seven. When he was nine he had a direct vision of Padmasambhava and received blessings from him.

When Pedma Norbu was in his twentieth year, the third Karma Kuchen Rinpoche, Do-ngag Chokyi Nyima, left this world. Pedma Norbu was filled with sorrow at the passing of his precious guru. He felt especially great remorse because he had not received the great Kagyed Desheg Dupa (Eight Herukas-Essence of the Sugatas) transmission. Due to the impression that the intensity of his remorse made upon his mind, Do-ngag Chokyi Nyima came to him one night in a dream. For three consecutive days, Pedma Norbu received, while in the dream state, the entire transmission of the Kagyed Desheg Dupa.


Later in his life, when he was not bestowing specific empowerments, transmissions, and teachings, or presiding over important accomplishment ceremonies, Pedma Norbu remained in solitary retreat, practicing the root recitation mantra of Dugngal Rangdrol (Self Liberation of Sufferings). Pedma Norbu made boundless material offerings to accumulate great virtue. Literally abandoning everything, he again entered into retreat at the isolated place of Khachu Trag. It was then he began to show signs of physical illness.

In 1932, the sixteenth rabjung year of the Water Monkey, on the third day of the third month, the second Drubwang Pedma Norbu’s mind entered the foundational sphere of truth. He was only forty-six years old. Khenpo Ngaga made many prayers for his swift rebirth. During the cremation ceremony, there was an earthquake, the sound of countless self-originating dharma instruments reverberating throughout space, a wondrously sweet smell prevailing in all directions, circular rainbows filling the sky and other miraculous signs which filled the hearts of many of his disciples with renewed faith and devotion.